CalPERS and the Point of No Returns

Washington, DC – The value of the S&P 500 index has increased by more than 275 percent over the past eight years, part of a historic bull-market run that’s gone on now for more than 100 consecutive months and counting. At the same time, a number of large public pension funds such as the California Public Employees Retirement System (CalPERS) find themselves facing dire financial straits, with actual returns falling well short of expectations and the base of contributors not growing fast enough to offset retiree outflows. If (and when) the time comes when these large funds, on which the retirement security of millions of Americans depends, can no longer meet their obligations, U.S. taxpayers will be responsible for shoring up the losses.

In this new report, the American Council for Capital Formation (ACCF) takes a closer look at the dire situation at CalPERS, with unfunded liabilities growing from a surplus of $2.9 billion in 2007 to a deficit of more than $138 billion today, notwithstanding the record-breaking performance of the broader market. These figures reflect the pension fund’s 2016-17 annual report, which was published on CalPERS website just before Thanksgiving, and on which the fund has yet to make a public statement. One key factor behind this consistently poor performance, according to the ACCF report, is the tendency on the part of CalPERS management to make investment decisions based on political, social and environmental causes rather than factors that boost returns and maximize fund performance.

The ACCF report finds that four of the nine worst performing funds in the CalPERS portfolio as of March 31, 2017 focused on supporting Environment, Social and Governance (ESG) ventures. None of the system’s 25 top-performing funds was ESG-focused. Ironically, CalPERS own management isn’t quite as enamored with ESG. Personal disclosures reviewed by ACCF indicate that the personal investment portfolios of the fund’s Chief Investment Officer and at least two other senior executives contain no ESG-related investments at all.

“CalPERS has demonstrated a troubling pattern of investments in social and political causes that are truly jeopardizing the retirement fund,” said Tim Doyle, ACCF’s vice president for policy and general counsel. “The problem is that millions of Americans depend on CalPERS and other large public pension funds to provide for a stable retirement. And if CalPERS isn’t able to make good on those promises in the future, taxpayers will be held accountable for the losses.”

The report’s key findings include:

The ACCF report also exposes the apparent political sway that CalPERS holds over other big money managers. This phenomenon was on display during the 2017 proxy season, when CalPERS was able to convince large institutional investors like BlackRock and Vanguard to back environmental-related shareholder proposals that it had championed, notwithstanding the potential of those proposals to have a damaging impact on the companies being targeted. Recent reports indicate that BlackRock is talking to CalPERS about managing some or all of its private equity investments, which currently amount to $26 billion. CalPERS also spends more than a billion dollars a year in fees for advice, including subscription services from proxy advisory firms such as ISS and Glass Lewis.

“Rather than focusing on getting the fund back on firm financial footing, CalPERS’s management is making questionable investments of pensioners’ money into social and political causes that are not yielding acceptable returns,” said Doyle. “And even more troubling, because of how big the fund is and how much influence it wields, it’s actually now forcing other large investors and proxy advisory firms with which it does business to follow suit.”

The ACCF report makes the following recommendations to protect taxpayers and other investors:

State taxpayers, pension beneficiaries and municipalities need to pressure the Board to stay true to its word. CLICK HERE TO DOWNLOAD: POINT OF NO RETURNS: TAXPAYERS ON THE HOOK FOR $1 TRILLION AS PUBLIC PENSIONS CHOOSE POLITICS OVER PERFORMANCE.

The American Council for Capital Formation is a nonprofit, nonpartisan economic policy organization dedicated to the advocacy of pro-growth tax, energy, environmental, regulatory, trade and economic policies that encourage saving and investment. 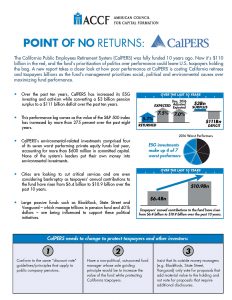